The Generation’s Logo and Expression 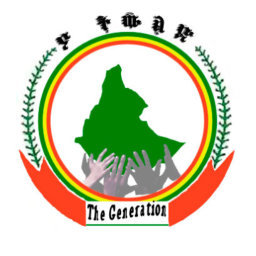 The generation died and struggled for sovereign Ethiopia, this reflects Ethiopia one people whose democratic rights are respected and a Country where the rule of law prevails.

The Green color on the map of Ethiopia Shows that the generation set out to lead their Country on the road of development.

The hands which hold Ethiopia: This shows that the generation set out to lead their Country Ethiopia together without discriminating anybody on the basis of Ethnicity Religion, Gender and Age.

The Palm leaves that surround Ethiopia: The palm leaves show fertility, growth and peace. The motive that the generation set out to do and the vision is still alive and Ethiopia which belongs to its children will move towards fertility and peace.

The red color that embraces the palm leaves shows the hope and the generation’s blood spilled during the reign of red terror was not spilled with impunity and this blood will grow fertility and freedom.

The Flag that surrounds Ethiopia: The green, yellow and red colors that surround the map of Ethiopia reflect that our national identity and the logo of our freedom.

Ya Tewlid (in Amharic) and The Generation: Written in Amharic in the shape of arrow above and below in English shows the name of our organization and also that we will establish a memorial for our organization.

The Generation is Immortal!

This email address is being protected from spambots. You need JavaScript enabled to view it.